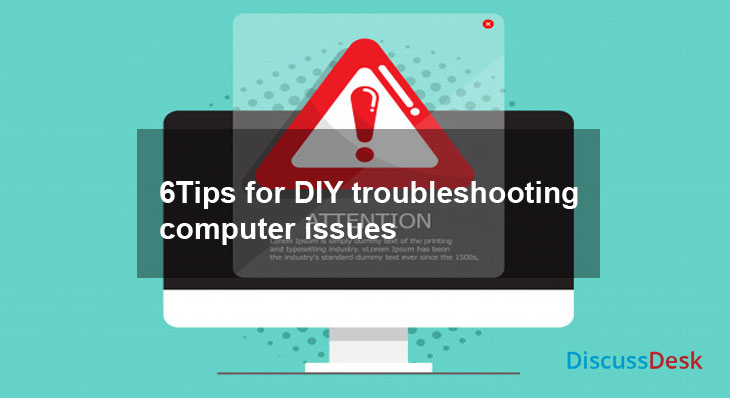 Tech failures are more maddening, debilitating, and exasperating than losing car keys or stubbing a toe. It’s an unfortunate reality that technical glitches tend to simply morph into new ones, but are never truly eliminate troubleshooting computer

That isn’t to say personal and business computing hasn’t massively evolved since the internet was first ‘plugged in.’ Many previously common issues are now laughably archaic, yet the problem remains that computers - just like many other machines - sometimes don’t do what we want them to do. A bit of technical attention is often needed, and - for most users - this is a particularly daunting task troubleshooting computer

The reason why computers are so maddening when they fail troubleshooting computers is that they don’t leak oil, shed wheels, or buck a fan belt. There’s nothing visibly wrong, but the device just won’t perform. Productivity comes to a standstill and it’s crushing, as it makes people realize just how dependent they’ve become on tech as part of their organized, daily life. Failing tech destroys to-do lists, eliminates happy dispositions, and completely ruins plans every day.

One aspect of tech that has never and is unlikely to ever change, is the best approach towards failing tech. It stems from a calm determination to eliminate possibilities, beyond which users can feel satisfied that they tried. Rather than helpless frustration, following a simple process of elimination enables one to feel competent, accept that things sometimes don’t go as planned, and make the best of what is. At the very least, following a simple checklist towards resolution enables users to understand when they need expert technical skills to resolve their issues.

Standard troubleshooting exists for a reason

While it’s true that a myriad of unique failures can occur with anyone device, as users have unique tech devices, app assemblies, or demands of their computers - the opposite is equally true. You’re the one who knows your device’s nuances and possible causes for failure.

As an expert IT consultancy in London, CITC can attest that many maddeningly obtuse computing issues often have a common and fairly simple root cause. It’s empowering - and nothing but good logic - to run through the following basic checklist to see whether it can resolve computer issues before calling professional support.

Yes, this first step is blindingly obvious, especially if you’re sure that you’ve set Windows Defender or another antivirus program to autorun in the background. Run the scan anyways. A thorough scan that turns over every rock and pebble might not be the autorun setting you’ve enabled - make sure it’s set for a full and thorough scan.

While the general consensus on modern machines is that the in-built antivirus is least compromised and most effective when used alone if you’re having issues a second set of “eyes” can help. Many developers have made lightweight apps that can catch malware which targets in-built protection and defeats them, if only for a moment. This second layer of protection can add to the effective eradication of malware corrupting your computer. Apps like EmsisoftEmergency Kit for Windows or Kaspersky Security Scan for Windows or macOS are solid choices. There’s also Microsoft Safety Scanner for Windows.

2.  Allow updates, or look for and install them

If, like many users, you’ve been postponing updates that are still nagging in a pop-up somewhere on your screen, take a moment and allow a restart and installation. Never forget that updates aren’t simply prompted by geeks with nothing better to do than tweak what’s already working, but rather security patches or other essential defense mechanisms to enable an app to continue working seamlessly.

The cybercriminal fraternity is global and tireless, and new malicious malware, ransomware, and even cryptojacking methodologies surface daily. Updating your software might seem inconvenient, yet it pales when compared to a crash caused by a refusal to take ten minutes and let your computer update. Updates are often already automated, but you’ll need to actively go look for them when your device is having issues.

With both Windows and Mac OS, update the operating system first, from Settings - Update in Windows, or from the App Store or the Applications screen in Finder with mac OS, switching to the Updates tab.

Whether from poor housekeeping or FOMO (one day you’ll need that app, so you can’t bring yourself to delete it), your device might be cluttered. While app icons tend to make our devices feel more familiar - and thus, almost make them feel more reliable - the opposite is true. Dump useless apps. Whether the technology is outdated, or the app never really found an application in your life, if you last used it months or years ago, get rid of it.

Cluttered collections of apps eat computing power, slow down operations, and cause fragmentation. Hoarding apps can very quickly eat available space and result in an overload that causes glitches. Buggy behavior is often related to a dusty storehouse of long-defunct apps. Go to Apps in Windows and uninstall those you can, or in mac OS drag the app shortcut down to Trash.

Apply the same housekeeping to your browser, too. Get rid of extensions you don’t use or probably can’t even remember. Use More Tools - Extensions in Chrome, Extensions in Microsoft Edge, or Add-ons with Firefox, working from the main app menu.

Finally, if you know you have duplicate bodies of work or simply excessive files all over your machine, collate and dump this excess, too. Even a modest spring clean can be the cure for a sudden new bugginess or persistent sluggishness.

A blank slate solution that appeals to many, troubleshooting computer reinstalling the Windows OS or macOS isn’t the nightmare it once presented as. Back up all of your personal files, perhaps making a note of downloaded apps you want to keep (you’ll need to download these again after a system wipes like this), and you’re good to go.

troubleshooting computer reinstalling will wipe out much malware, eradicate viruses, and reset your connection settings. If you’ve been diligent about backing up, reinstalling your old files will be a cinch, and you’ll know the OS is running clean again. It doesn’t always work, but with the current ease of re-installation on both Windows and macOS, it’s no longer the desperate and laborious process it once was.

In Windows, go to Update - Security and select Reset this PC. Follow ensuing prompts. On macOS, you’ll launch the utility program by holding downCmd+Rwhile you depress the power button, then follow the prompts.

While this step only deals with connectivity issues, it’s fair to say a large percentage of computing issues center on internet connection via Wi-Fi.

Ever notice how a techie will always plug in an Ethernet cable when they start to look for issues? Do the same. Plug in a physical cable between the router and your PC. If you still don’t have internet access - and your phone or tablet or other devices aren’t getting it, either - you can be sure the issue is with the router device or the service provider behind it.

Switch devices and the router off and on again to see if that resolves issues. If not, reboot the router (there’s typically a pinprick hole at the back of the device that will reset it) and see what happens. For example, if some devices connect while your PC won’t, then you’ve isolated issues down to a single device. If nothing connects, get on the phone to your service provider’s support.

You might want to peruse community forums for solutions to persistent hassles if none of the above points resolve your issue. Fortunately, there’s a significant amount of intel online that answers many seemingly intractable issues. However, forums can be quite diverse; given this, much good intel can be so organized and overly technical troubleshooting computer that it demands a steep learning curve just to make sense of what’s being said.

Take heart, as you’ve been technically troubleshooting computer proactively, asked around, applied solutions as you could, and now know that there’s a legitimate issue at play. You know it’s not something simple or, even if it is, it falls decidedly within the realm of professional tech expertise.