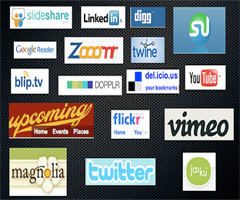 Internet
In present world, Showing your creative skill is necessary. For this, Everyone want a platform where they can share their creative video. There are several platforms are available in Internet like YouTube, Vimeo etc. In these platform when they upload any video, all the user of internet can access their video. It is quite best platform for the people who want to such type of sharing of video.
1. YouTube (www.youtube.com)
YouTube is a video-sharing website, created by three former PayPal employees in February 2005, on which users can upload, view and share videos.The company is based in San Bruno, California, and uses Adobe Flash Video and HTML5 technology to display a wide variety of user-generated video content, including movie clips, TV clips, and music videos, as well as amateur content such as video blogging, short original videos, and educational videos. n November 2006, YouTube, LLC was bought by Google for US$1.65 billion, and now operates as a subsidiary of Google.
2. Vimeo (www.vimeo.com)
Vimeo  is a U.S.-based video-sharing website on which users can upload, share and view videos. It was founded by Jake Lodwick and Zach Klein in November 2004. They left the company in 2007 and 2008 respectively. The name Vimeo was created by Lodwick and is a play on the word video, inserting the word "me" as a reference to the site's dedication to user-made video and is also an anagram of the word "movie".
IAC/InterActiveCorp purchased Vimeo in August 2006, as part of its acquisition of Connected Ventures. Dae Mellencamp is the Chief Executive Officer of Vimeo. In January 2009, Mellencamp joined IAC as General Manager of Vimeo.
3. Sevenload (www.sevenload.com)
Sevenload is a German-based video-sharing website on which users can upload, share and view videos. Since its founding in April 2006, the platform emerged on international markets to become a Social Media Network for photos, videos and web TV content. sevenload shows licensed content channels and allows users to upload their video and photo contents onto the site and then tag them, put them in albums and share them with other users, and is considered by some to be a counterpart to hulu in the US.  The Company was founded in April 2006 by Ibrahim Evsan, Thomas Bachem, Axel Schmiegelow's Venture firm dw capital gmbh, and K2 Interactive GmbH of Akgün and Tamer Kulmac.
4. Youku (www.youku.com)
Youku Inc., formerly Youku.com Inc.,doing business as Youku (literally "excellent (and) cool", NYSE: YOKU), is a Chinese video hosting service based in the People's Republic of China, it is the second largest video site in the world with a alexa ranking just after YouTube. On March 12, 2012, Youku reached an agreement to acquire Tudou in a stock-for-stock transaction, the new entity being named     Youku Tudou Inc. Youku was founded by Victor Koo, former President of Chinese Internet portal Sohu. Initial funding for the site came from 1Verge, a fund raised by Koo. A beta version of the site was launched with limited geographic reach in June 2006, and the website was formally launched in December 2006.
5. Viddler (www.viddler.com)
Viddler is an interactive online video platform (OVP) for uploading, sharing, enhancing, tagging, commenting on, and forming groups around videos. Viddler no longer provides a free service for non-commercial users and now requires all users to choose one of the three paid plan options. Paid service includes support, a customizable player, the ability to create a private community, detailed analytics, priority encoding, HD encoding, iTunes support, branding and control over advertising, including a revenue-sharing option.
6. Tudou (www.tudou.com)
Tudou, Inc. ( "Potato Net") is a video-sharing website in People's Republic of China, where users can upload, view and share video clips. Tudou went live on April 15, 2005 and by September 2007 served over 55 million videos each day.
7. Tinypic (www.tinypic.com)
TinyPic is a photo and video sharing service, owned and operated by Photobucket.com, that allows users to upload, link and share, images and videos on the Internet. The idea is similar to URL shortening in which each uploaded image is given a relatively short internet address. An account is not required to use TinyPic.
8. blip.tv (www.blip.tv)
Blip (formerly blip.tv) is a platform for web series and also offers a dashboard for producers of original web series to distribute and monetize their productions. The company was founded in May 2005, is located in New York City, and is financed by Bain Capital Ventures and Canaan Partners.
9. Liveleak (www.liveleak.com)
LiveLeak is a video sharing website that lets users post and share videos. Liveleak places emphasis on current events, politics and reality-based footage such as war scenes from various parts of the world.
The site went live on October 31, 2006. Founded by the team responsible for the Ogrish.com shock site, it aims to take reality footage, politics, and world events and combine them with the power of citizen journalism.
10. Metacafe (www.metacafe.com)
Metacafe (stylized as Metacafe ) is a video-sharing website that specializes in short-form video entertainment in the categories of movies, video games, sports, music and TV.
Internet