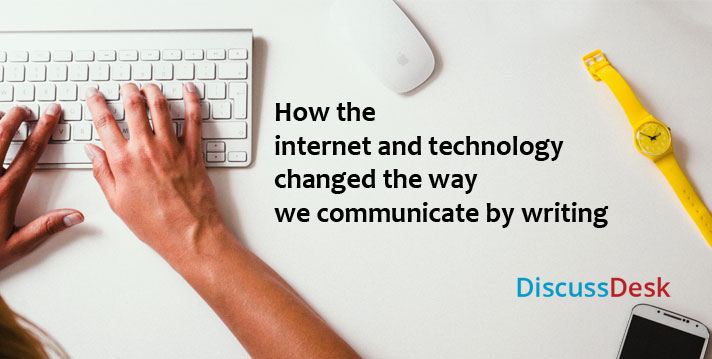 A rattling good speed, any distance and low cost of modern communication allowed us to make enterprises more efficient, and life more flexible. Those days went by when a meeting was arranged for a week and no one called anyone back to clarify the details of the meeting. Today everything is decided at the last minute. We finally have the opportunity to become more impulsive and less inertial. All this is possible due to the Internet. How did the introduction of the Internet changed the way we communicate in general and how does it affect the way we write? The Vip-Writers experts will explain today.

Technology changes the world. Studies show that, on average, we spend about a third of the time online on social networks. Moreover, there are around 1.6 billion mobile users of social networks worldwide. “However, strangely enough, new technologies do not bring us together, but create a new kind of loneliness instead, leading to cultural disintegration. Because of new technologies, we forget about physical contact, replacing it with electronic, so in many respects, we have become even more fragmented than ever,” says Matt Vierra, the Vip-Writers expert team member.

“Before, we had enough of a pen and a pencil, but our demands became more complex. Modern children use computers much more naturally than their parents used the phone in their youth,”  explains Matt.

The invention of the alphabet led to the creation of a civilization of people who think with the help of words. It caused language evolving, while the implications of technology are completely different: they stimulate another area of ​​the brain responsible for imagination. Literacy is not a prerequisite for social media language, there is no need to be able to read and write, to turn on the television or to visit the site.

According to a study by the clerical company Docmail, two-thirds of the 2000 respondents said that they make notes sometimes, but these are usually short reminder notes. In addition, more than half of the respondents admitted that their handwriting had deteriorated markedly since school times and, on average, one person in seven is ashamed of his/her illegible handwriting. Researchers predict that in the length of time  good handwriting will be as rare as a talent for painting.

A similar situation was observed when switching from dip pens to ball-point pens. At the same time, the level of calligraphy immediately fell. A ball-point pen is a very practical invention, but with it, writing has become less elegant. Accordingly, the transition to the keyboard or touchpad typing completely destroys the art of writing by hand.

Language and speech on the Internet and everyday communication are increasingly converging - this is the natural and inevitable trend of language evolving in the era of the development of the world wide web. The problem is that users transfer the terminology from the virtual world to real life, replacing competent speech with a stream of abbreviations and Internet slang.

Phrases are no longer just Internet slang, they take root in the language. But there is a great risk that this leads to a decrease in the literacy and culture of the younger generation.

The older generation communicated through letters, composed literate texts, and strove for the beauty of the language. Modern youth simplifies their lives as much as possible through short correspondence, using simple terms in everyday life. Internet users do everything quickly. They do not pay attention to grammar, punctuation, and spelling. This isn't about even the high writing style of speech. As a result, we regularly come across solid canvases of the text, which sometimes can’t be deciphered even by the author itself. These are messages without capital letters and punctuation marks. Mistakes in words and incomprehensible abbreviations are also the norm. Young people get used to this style. But on a psychological level, such communication causes a serious loss of literacy of live communication. After all, if 10 times a person sees the wrong spelling of a word, it will be deposited on the subcortex of the subconscious. All this causes illiteracy in modern society.

The intentional spelling of phrases with errors like “Dat” instead of “that” is a characteristic feature of Internet communication. We are not talking about the ignorance of such interlocutors. It is rather a game. With this method of communication, committing errors in elementary words, a person expresses himself/herself, unconsciously challenging the generally accepted norms of communication.

The writing was invented thousands of years ago, but since then we have not improved it in any fundamental way. We only came up with how to speed up the writing using typography and keyboard, and transfer using mail and the Internet. And it is unlikely that this ancient way of communication will go away at all. Another thing - a new development of writing - typing using the keyboard and touchpad - impairs the ability to write by hand, lowers the level of literacy.